So I will just give you some quick highlights.

One of our show and tell ladies for the evening was Jackie who has come back for Christmas with her family. She is visiting us from South Africa. In this photo she is showing us her quilt called "The Treasures in Uncles Garden" 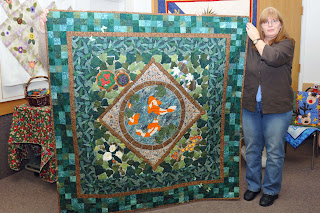 Here are Kathy and Lorie presenting a little treat to Marg andwishing her well. 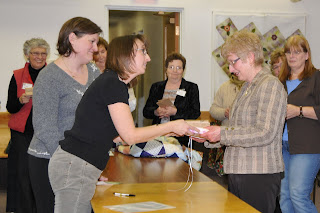 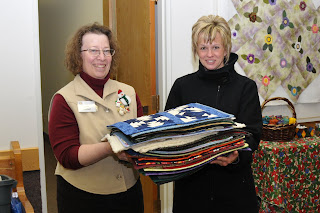 President Lorna is presenting the quilts for the new Safe Haven Home. 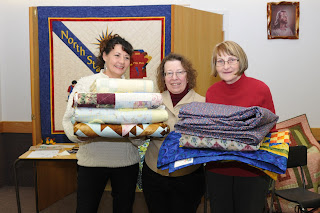 At last we have completed quilting the round robin quilts. Here is the final result. They really turned out nice. 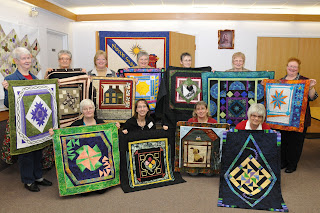 Merry Christmas Ladies and Happy Quilting in the New Year.

I don't have any photos from the Christmas party yet, but I wanted to get this story up before Christmas.
This is the fat quarter exchange story we used this year. It is a tribute to Marg for her years in the store, and all the patience she had with her customers. She was always there for us whenever we were in with our quilting questions. Thank you Marg and a Very Merry Christmas and a Happy New retirement to you.


Twas the night before Christmas
by Kathy S

When all through the house
Piles of fabric from Faktor’s, where scattered about.
Bags of notions where hung in sewing rooms with great care
From Marg’s closing sale, you know you were there

Now Marg was all settled in her new sewing room
Just finishing up quilts that she had started …last June
She’s had a month on her own with no store to run
Enjoying her time and finally seeing the sun.

When out on Marg’s lawn there arose such a clatter
She sprang from her machine to see what was the matter
Away to the window Marg flew like a flash
Trying not to trip over her own fabric stash.

The snow how it sparkled on the trees by the lake
The house filled with the aroma of warm Christmas cake.
When, what to Marg’s wondering eyes should appear
But the North Star Guild quilters, about 50 I fear.

First there was Lorna, so lively and quick
But why were they here, it just didn’t click
In a cloud of white snow the quilters all came,
And Marg whistled and shouted and called them by name

Now Karen, now Janice, now Linda and Jean
“You’ll wake my neighbours, you’re causing a scene”
Oh, Joyce, oh Alta, oh Michelle and Annette
“It’s the middle of the night, off, off you get!”

“But Marg” said Adele, “ We can’t handle the stress”
“It’s been a month without Faktor’s, we’re all a mess.
Our quilt tops lack backings, we’re all out of thread
Our needles are breaking and humm…do I smell bread?”

“It’s fresh Christmas cake, why don’t you all come in
But please watch your step I think I dropped a pin”
Passing boxes of fabric that reached up to the rafter’s
This is definitely the home of John and Marg Faktor


Now John was dressed all in flannel, from his head to his feet
And was covered with threads, and not looking too neat.
He had been organizing the fabric for many long weeks
Asking Marg “Where would you like this my little sweet cheeks?”

John’s eyes how they twinkled, for all the years they’ve been married
His cheeks were like roses, from all the bins that he’d carried.
John’s droll little mouth seemed to say “Am I done?”
As he stared at the stash which weighed more than a ton.

The quilters stared in amazement, it was a sight to behold
The tower of fabrics that had never been sold
It brought back fond memories of time spent at the store
And the amazing employees…who were never a bore.

Darlene remembered the hours there picking out fabric
The quilters would have to come up with a new shopping tactic
Online shopping is only part of the fraction
“So a road trip”, shouts Laura “would be the next plan of action”

Barb and Marg have taken a few trips to Melfort
While Eileen says stateside is the place to cavort
Marlyn and Jeri found out Morden’s shop is online
And Bev says Moose Jaw stores are oh so divine.

Kick Ass in Plumas is one real hip store
Lori and Kathy will definitely go back for more
Regina’s a place Yvonne recommends
There you’ll find Peachtree where the bolts never end.

Now Marg spoke not a word but went straight to work
She served her guests then turned with a jerk
“I have a plane to catch in less than an hour,
We’re going to Paris to see the Eiffel Tower.”

The quilters left that night, with a feeling of glee
Marg had not gone but was just a bit more free
And she heard them exclaim as they drove out of sight
“Thanks for all the great service, and have a safe flight” 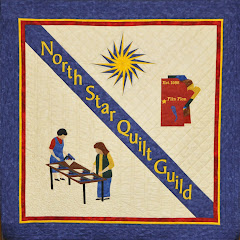 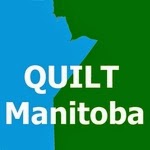